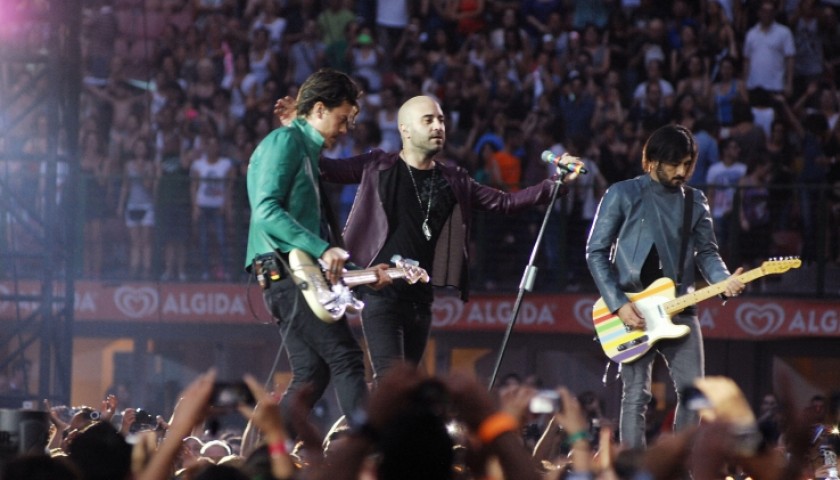 This item is being auctioned as part of a lot that contains some very special prizes including exclusive clothing and items that come directly from those working behind the scenes in the music world.

Maybe not everyone knows that the t-shirts, sweaters and caps that the staff members wear during concerts and tours are specially produced for them. These are personal original items that are kept by the workers as true pieces of memorabilia, reminding them of incredible experiences and emotions that they've enjoyed at a particular concert or with a particular artist. This lot boasts 107 unique pieces, unmissable official merchandising that includes t-shirts, jerseys, sweaters, jackets, caps and even a pair of shoes! You'll find the Security staff's t-shirt from Italian singer Vasco Rossi's concert at San Siro in Milan that took place in 1990 as well as a t-shirt designed by Versace for the Gun’s and Roses concert in 1993 and even the t-shirt worn by backstage staff at the AC/DC concert in 2009.

The WORKERS project was set up by Zona5 and Bauli in Piazza to give a voice and a face to operators in the entertainment, music and events industry. The project focuses on a series of activities that will include free workshops held by music professionals and an urban installation that will be open to all exhibiting portraits taken by Cesare Cicardini of the people behind the scenes, giving a face to the professions that are essential for live shows.

The funds raised will be donated to Bauli in Piazza, a movement representing professionals and companies in the entertainment and events sector, for the creation of free workshops held by music professionals that aim to introduce young people to music industry professions.

This auction is subject to a Buyer's premium related to the online sales platform that you're using. This Buyer's premium includes sourcing of the lot, evaluation of authenticity, storage, sales activity and customer support. The minimum Buyer's premium for this lot is €9.95.

The total cost for this lot does not include shipping costs, which are not specified until auction closing and vary according to the size and weight of the item, as well as the recipient's address. The minimum shipping cost is €9.95. Tickets, vouchers and goods are generally shipped via courier and must be signed for on delivery, unless otherwise stated. In some cases tickets will be left in the auction winner's name for pick up at the ticket office of the event location.