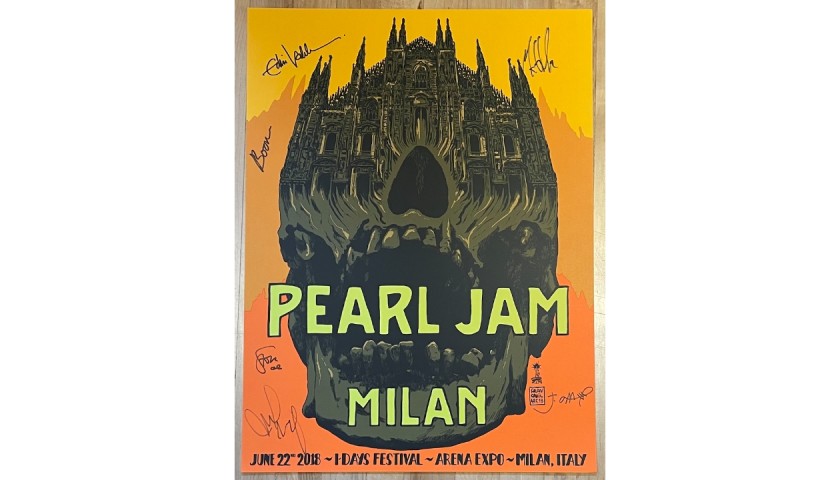 Contact us
Charity percentage
82% How it works?
We accept

Formed in Seattle in 1990, Pearl Jam are pioneers of the alternative rock movement that changed music forever. Their 1991 breakout debut album Ten, had a lasting impact, achieving mainstream success. They have sold a staggering 85 million albums worldwide and  inspired countless artists with their huge back catalogue of hits, including Black, Jeremy, and Alive.

Firstly, the band has donated a poster from their headline show at i-Days festival in Milan, Italy in 2018. This gothic print was one of a small number signed by all 5 members of the band and a spectacular piece to add to any fan’s collection.

Secondly, concert promoter AEG has donated 2 tickets to Pearl Jam’s rescheduled American Express presents BST Hyde Park show in London on 8th July 2022. This will be the band’s first UK show since 2018 and sees them joined by The Pixies with further support acts TBC.

Your 2 tickets entitle you to the following:

You and your guest will be treated to your own backstage tour of the festival for behind-the-scenes access on how the almighty production is brought to life! Please note this does not include a meet & greet with Pearl Jam.

Donated by
Pearl Jam and AEG

Music Support is a charity that helps peers who work in UK music and live events affected by mental ill-health and/or addiction. Founded in 2016 by people from within the music industry, our team have all been affected personally by these issues and have seen friends, colleagues and heroes lose their careers, families and even their lives.

Music and live events continue to be hit hard by the uncertainty, fear, isolation and financial consequences of the global pandemic. From musicians and DJs to promoters and crew, the way back is still very unclear, meaning our services have never been more important.

We provide peer-led support, education and training and signposting to a network of vetted and approved professionals.

Our mission is to ensure that our peers do not feel alone. We encourage prevention and early intervention but, if required, provide effective and timely help to initiate and maintain recovery.

This auction is subject to a Buyer's premium related to the online sales platform that you're using. This Buyer's premium includes sourcing of the lot, evaluation of authenticity, storage, sales activity and customer support. The minimum Buyer's premium for this lot is £305.50.